How to use lock nuts and skills

When we use a fastener, we don't want it to fall off. Unless we choose to use a lock nut, shedding will still happen frequently. So why in some cases an ordinary nut can't play its due role?

If a nut is difficult to install, it is also more difficult to make it fall off. In most cases, this is beyond doubt. However, the torque that makes the fastener install more securely does not counteract all the forces that might loosen the fastener. Once the torque is cancelled out, it is only a matter of time before it falls off.

There are many factors that negatively affect the performance of fasteners, such as: bending force, corrosion, hydrogen embrittlement, joint movement, prying force, steep shock load, extreme temperature and vibration. How to control these negative effects has long troubled people. Therefore, the lock nut has come into use because it is specifically designed to prevent loosening.

It has always been recognized that the way to ensure sufficient safety for the bolt connection is to use a combination of two independent nuts: first tighten the thinner nut, and then tighten the thicker nut. However, this method still requires regular inspection and tightening, because force has been applied to the fastener during use to loosen it.

Give an example of fasteners used on railways. The rails need to constantly resist the large amount of vibrations caused by train operation, while at the same time maintaining the integrity of the connections. Throughout history, railway accidents are often caused by damage to the connecting parts, and this damage is caused by loose fasteners. However, this loosening can be solved with anti-loose technology. 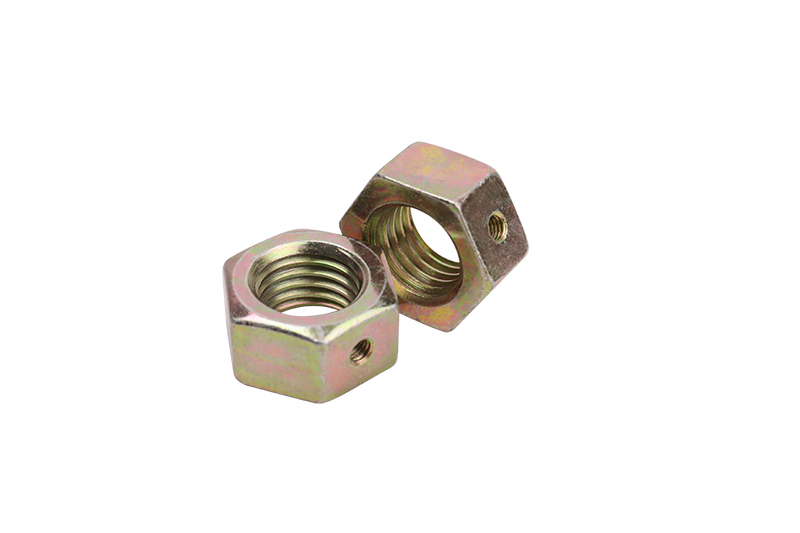 The lock nut is easy to install and can be reused. Precision machinery self-locking nuts with copper pins are widely used in machine tools, engineering and other industries. The working principle of the nut is self-locking by the friction between the nut and the bolt. However, the reliability of this self-locking will be reduced in dynamic loads. In some important occasions, we will take some anti-loose measures to ensure the reliability of the nut locking. A lock nut is one of the anti-loose measures. The anti-loosening effect of the lock nut mainly depends on the interaction force between the nut and the bolt thread. There are many ways to improve the interaction force between meshing threads, such as structural improvement of nut threads and surface treatment of threads.

The lock nut uses imported technology, developed and checked by engineers who have been in the industry for more than ten years, to ensure the thread accuracy of 4H, the nut vertical accuracy of 0.002—0.005mm, and the interaction force between the meshing threads. The traditional locking method requires two nuts and washers to be tightened together. However, with the vibration of the application body, the two-piece nut and washers will gradually separate, resulting in poor locking effect. The precision lock nut is combined with a copper pin and thread embedded in the nut. When the nut is tightened, it starts to squeeze the copper pellet pin so that the copper pellet pin bites the external thread tightly, effectively preventing loosening and stopping.

0
Views: 6
PREV: The most basic method of fixing nuts at work
NEXT: What are the types of fastener sealing?